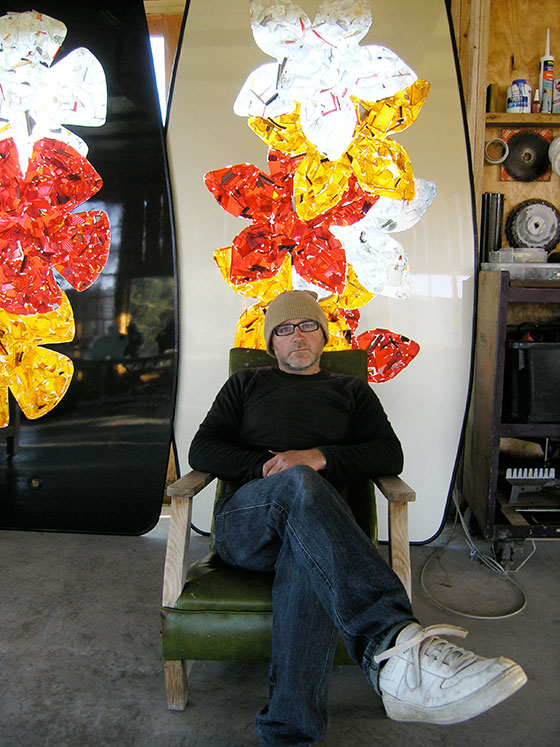 Tasmanian based sculptor Matt Calvert works in the medium of toughened glass, creating large scale figurative silhouettes that piece together memories and objects from his personal history. His unique choice of materials, like his career, came about through chance encounters. Artist Profile discusses with Matt the evolution and expanding nature of his work. I’m interested in your journey into the arts. Can you tell me a bit about your background? At the very beginning, I didn’t really have any desire to do anything related to art—in fact, I was very into science. But when I was at matriculation, I met an artist and he was quite encouraging. I was really interested in doing geology—that was what I was hoping to do but my direction changed quite dramatically. Life’s quite arbitrary; you really don’t know where you’re going half the time. I went on to [University of Tasmania at] = Hunter Street in Hobart and did the undergraduate down there. I received a Samstag [scholarship] and went to London and did my masters at Goldsmiths. It was a 12-month course at that stage. I came back and just hunkered down in the studio for the next ten years—trying to recover, I guess. So at university you studied a major in sculpture? At Hunter Street I did a double major in painting and sculpture. And then I did honors in the sculpture department. Is this where you began working with glass? How did you find yourself working with this less than conventional material? I stumbled upon it when I was at art school by just visiting local manufacturers and getting scrap material. I needed something that was cheap and readily available as I didn’t have money to fund my works. I was constantly harassing the local glass companies for scrap glass. We had a relationship that ‘cause I was doing well in my course, I would get all their scrap glass. Like everything in my work, and semi in my career, it’s a bit serendipitous—you stumble over something that takes you on an interesting journey. I have a habit of finding glass.

While you say you stumble and journey, a lot of your works are clearly figurative. From where do these figures of children and animals come? They’re borrowed from a magazine of my father’s. He was killed in a car accident when I was seven. I went through a bit of a stage after art school where I was rediscovering him as a way of coming to terms with what had happened. I have very little memory of him and there’s not a lot remaining of his possessions. But one of the few things that was kicking around was an old magazine that he had in the ‘50s. It’s a little boys’ own annual called the I Spy Manual. All of those figures are taken from the pages of the magazine. And there are little inscriptions by my dad and—he was only 7 or 8 at the time— he’d put his hand on the back of the book and drawn around it. That appears in more recent work as well. So that’s where they come from. And it’s a bit of an obsession I have with him. Can you take me through the process of how you create your work? I generally spend the first month or two of a project wandering aimlessly and wondering what to respond to. Usually it’s a found material or a found object. I try and reinterpret an object through the process of making work. The thicker glass I’m using now in the figures was just a result of a trip to the glass shop. It was a complete accident that I stumbled upon the toughened glass. I got some glass which I thought was a simple plate but it was toughened. I was hitting nit with a hammer, trying to smash it and it exploded. I thought, ‘I can put this back together and re-configure it’. So I approached it the same way that I would’ve approached a simple plate. I didn’t think it would have any structural strength but I was amazed that if you keep layering it, layer upon layer, it becomes quite strong. Is this the reason for the growing scale of your works? Your more recent bunnies, for example, are much bigger than your I Spy animals. I guess I’m testing it to a certain extent, to see how large I can go. You start with these tiny little fragments and they’re laborious things to make. You spend months and months and months putting these things together. A lot of the bigger works have an internal armature; they’re held together by aluminum and strut. But I guess I’m trying to work out how big I can go.