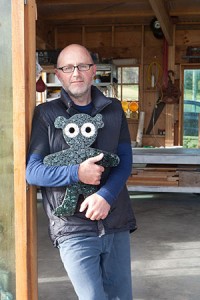 “It is not unusual to find Tasmanian sculptor Matt Calvert scouring highways for splintered shards of shiny plastic. The reflective remains of broken taillights, headlights and indicators are gathered like prized jewels alongside the twisted relics of steel fenders and car door frames. As he collects each dilapidated item, Calvert wonders about the object’s history. Were there fatalities? How were families affected? The memory of his own father, tragically taken in a car accident when the artist was a child, comes to mind during the ritual of collecting and resonates throughout his ensuing artistic practice. As a result, Calvert’s meticulously assembled sculptures often incorporate striking symbols of loss, caution and memory.” – Bryony Rhodes

Matt graduated from the University of Tasmania with a Bachelor of Fine Art (first class honours) in 1993. He was awarded a Samstag Scholarship to Goldsmiths College, University of London, where he completed a Master of Art degree in 1994.

After residencies in Paris, Malaysia and Japan earlier in his career, Matt’s practice now focuses on small and large-scale public and private commissions that feature recycled, toughened glass, sometimes in conjunction with corten steel and aluminium.

Matt sources his glass from waste material, smashes it up in his studio in aptly-named Glaziers Bay in southern Tasmania, and reconfigures it using a cold fusion, flat mould lamination technique into quirky forms of children, an iconic range of farmyard and exotic animals and more recently, tree-like forms. When creating his work he often references illustrations from old picture books, ‘cookie cutter’ figures and likenesses of his son, Eddy.

A recurring theme in Matt’s work revolves around roadside tributes and memorials, referring to the loss of his father in a car accident when he (Matt) was only seven years old and featuring most recently in the work selected for the 2014 McClelland Sculpture Survey, Dieback.

A regular finalist in major Australian sculpture awards over the past 15 years, he won the Montalto Sculpture Prize in 2015 for the work Pointing Girl. His work is held in public and private collections in Australia, Japan, Malaysia and the United States.

Matt was a member of the Asialink Arts Advisory Committee between 2010 and 2013 and in 2015 became a member of the Res Artis International Residency Network with his studio space, The Pickers’ Hut @ Glaziers Bay.