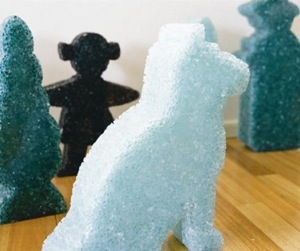 Part of the mystery of finding something is the imaginative process that ensues, trying to piece together a narrative that will make sense of things. There are questions to be answered. Davy Rothbart, Editor, FOUND Magazine

It is not unusual to find sculptor Matt Calvert scouring highways for splintered shards of shiny plastic. The reflective remains of broken taillights, headlights and indicators are gathered like prized jewels alongside the twisted relics of steel fenders and car door frames. As he collects each dilapidated item, Calvert wonders about the object’s history. Were there fatalities? How were families affected? The memory of his own father, tragically taken in a car accident when the artist was a child, comes to mind during the ritual of collecting and resonates throughout his ensuing artistic practice. As a result, Calvert’s meticulously assembled sculptures often incorporate striking symbols of loss, caution and memory.

Reclaiming discarded, broken material is an integral aspect of Calvert’s practice. The generic detritus of industry––plastic, metal and glass––finds a fitting home in his work. Taken back to his studio, these remnants are individually cleaned and sorted into large bins, ready to be constructed into new objects infused with a different meaning.

Jagged pieces of red, orange and transparent automobile plastic and icy pellets of shattered glass form the fragmented shapes of floral tributes, arrows and street signs he constructs on thick reflective sheets of vinyl and aluminium. Seductively appealing, Calvert’s work is loaded with possibility. Contained within each composition are the elements of a previous purpose and the promise of purpose reconstructed and reborn.

While he has always harboured a penchant for found materials, the desire to consistently use them in his work was thoroughly teased out over the course of several influential international residencies. Since 1995, Calvert has lived and worked in France, Malaysia and Japan. During his time overseas, Calvert drew inspiration from his surrounding environment and began to produce work reflective of his experiences with urban architecture, the industrial fallout of economic decline and the fractured experiences of culture shock.

The frosted green grit of glass consistently reappears in his work and like the broken pieces of automobile plastic, it has become a trademark material for Calvert. While overseas, glass salvaged from the abandoned skeletons of incomplete apartment buildings and office blocks, used subway tickets and discarded ceramics began to form the base materials for much of his work. Objects stripped of cultural relevance were injected with value and became the building blocks of a sophisticated visual narrative. 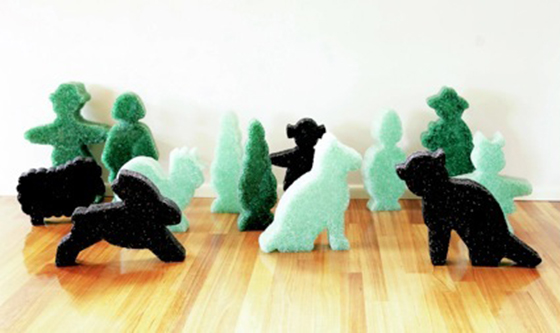 The creative shockwaves sent out during these residencies have continued to reverberate and can still be seen in Calvert’s current work. In recent months, the simple shapes of traditional, handcrafted wooden toys have become the subject of sculptures created from toughened glass. Stout, knee-high figures of men, women and children are grouped together with their respective pets in a tableau of suggestive social commentary. The familiar shapes and the nostalgic titles Calvert applies trigger the deep recesses of memory and recall a time when life may have appeared simpler. Like a child constructs a scene with Lego®, Calvert carefully arranges various sets of social possibilities, questioning the broader cultural implications they each may present.

Alluring in its visual appeal and use of evocative materials, Calvert’s work unashamedly draws us in. Beneath the enticing surface lies an innate meaning, an inner life that whispers of another time, another place and another purpose.