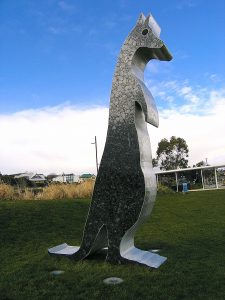 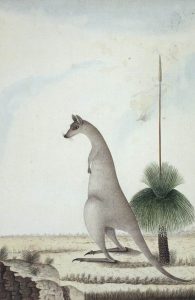 A recent Public art work has been installed at the Kangaroo Bay Parklands, on Hobart’s Eastern Shore.

The sculpture is an interpretation of a drawing of an Eastern Grey kangaroo titled Gum-­plant and Kangooroo of New Holland that was made by colonial artist George Raper in around 1789.

Like many of his contemporaries, the artist was clearly fascinated by his strange and exotic subject, and gave it some new and unique features such as its peculiarly skinny forearms and rat like face.

Eastern Grey Kangaroos lived in substantial numbers on the eastern shore in the early years of European settlement and for many years before that, when the area was home to the Mumirimina people of the Oyster Bay tribe.

They were an important and plentiful food source for both the local Aborigines and the new settlers.

The artist and work was selected by Clarence City Council’s Public Art Panel as a “playful interpretation of an important historical image with strong ties to sense of place and connection to the colonial and aboriginal history of the site”.