With My little eye Sullivan and Strumpf Fine Art 2007

The wistful charm of Matt Calvert’s recent glass figures is tempered with a precise choice of materials. The use of shattered windscreens from vehicle road accidents indicating that the devil is in the detail; Winnie the Pooh innocence and blackcurrant pastille silhouettes fuse with a touch of bitterness. 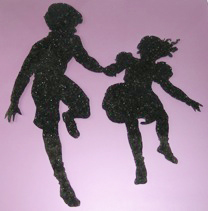 The figures, taken from illustrations to a 1950’s children’s book, point to a period in history when (in retrospect at least) common decency was on the turn, the 1960’s heralding an era of suspicion toward governmental authority, a general loss of innocence. For Calvert these observations go hand in hand with the death of his father in a car accident while still a boy and that the book from which these illustrations are taken belonged to his father.

As if to echo this loss of simplicity and integrity, the reclaimed automotive glass is a clear statement as to the ‘loaded’ nature of all materials used by artists. There’s a story to their given hierarchy and usage, contrary to the traditional notion of an idealised neutrality, as pure colour or form etc. The process by which an artist manipulates them becomes paramount and not only to the reading of the artists work. The way Calvert uses found objects alters our perception and knowledge of the every day materials we’re familiar with.

Unlike mending broken china, Calvert’s work is not simply a case of putting the pieces back together again, hoping that the cracks won’t show. The initial impact of a car accident makes waste of sleek protective layers, atomising glass. Its painstaking reconfiguration is not a construction akin to jigsaw puzzles or Lego, it’s more precarious and desperate than that – these components weren’t designed for reconstruction. The poignancy in these works lies in Calvert’s forcing into place a concretion of fragments, heartbreakingly lost to one another – a process of reconciliation that’s essentially flawed. 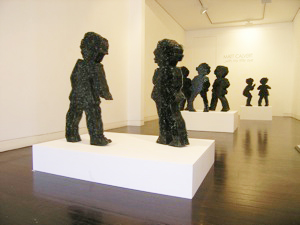 Besides the longing to construct solidity from the debris of violent collisions, to get a grip on things, the figures of children that result suggest a desire to trace a path in time to that fierce unforseen event, holding onto a shadow of innocence. We become faced with a melancholy incapacity to account for such brutal contingencies. An instant too fast to reason with, a split second that will never find its context, never be resolved or correspond with its repercussions.