Reflections: Picking up the Pieces

Tasmanian artist Matt Calvert, top, and with his father Greg, bottom, who was killed in a road accident.
Photo: Peter Mathew

As flowers go, they are a bit greasy and muddy, for sure, but smashed scraps of car reflector lens actually make rather beautiful floral arrangements. The fragments are almost jewel-like in their red, amber and clear tones, a mood accentuated by the way they burst out of large, glossy panels in racing-car colours.

In his new show, Hero, Matt Calvert presents these flowered panels as memorial plaques to people who have died on the roads – but the works are not without humor. His idea is that these plaques could be some sort of additional feature thrown in when you buy a high-performance car “so that if something ever happened to you, you could have the same colours, the same trim, the same design features on your wall”.

Something happened to Calvert’s father Greg: he had an accident in his green Capella and died in 1976, when Calvert was just seven. His father’s death has long eaten its way into Calvert’s work, but he senses it is moving away from these beginnings to become “more universal”.

“When I started this show, the colour combinations were going to be taken from my father’s car, the one he was killed in. But I started looking through the catalogues that you get from retailers of fast cars and it started becoming less and less about my father and more about advertising campaigns and the way they market these things,” he says.

“When you read through these catalogues – because you can’t help but read them, they are so glossy and beautiful: they promise so many things.

“That idea of safety and speed is not really well defined. That was something that was bothering me and something I wanted to tease out.”

In teasing it out, Calvert collected bits of indicator lights, brake lights and reverse lights from the road, supplementing his stocks with fragments from panel beaters and wreckers. He sorted it into big bins in his north Hobart studio and then went through his collection of glossy car brochures, picking out aspects of high-performance vehicles to use as the background panel for his flowers.

Calvert chooses shapes such as the simplified form of an exhaust pipe, an indicator panel or a dashboard.

His flower shapes (unrecognisable, generic specimens) are cut into the panels so that he can fill them with his pieces of broken reflector lens.

“Strange as it may seem, positioning (the bits of lens) is the most memorable part of the work, and I remember each piece, actually putting it in its place,” he says. “At times, you get lost in it and you think about the history, where it came from.

“Sometimes when I pick these things up from panel beaters and wreckers I wonder about the fatalities involved: I think of families and how many people have been affected by it.”

This arranging of scraps of reflector lens evolved from a residency in Japan four years ago, during which he collected about 10 kilograms of the stuff.

“I was staying in Sapporo and living with this Italian guy called Marco, and we used to spend most of the day walking around the ice. Every two or three hundred metres, the cars were sliding and banging into each other and I was picking up this material and taking it back to the apartment wondering what I was going to do with it.”

He decided to use the fragments in a way that was derivative of their original use, so that the bits of old indicators formed shapes with directional qualities (arrows, say), the break lights formed works that somehow alluded to stopping, the reverse lights to taking a step back. “Then I started making these other links about my dad,” he says. 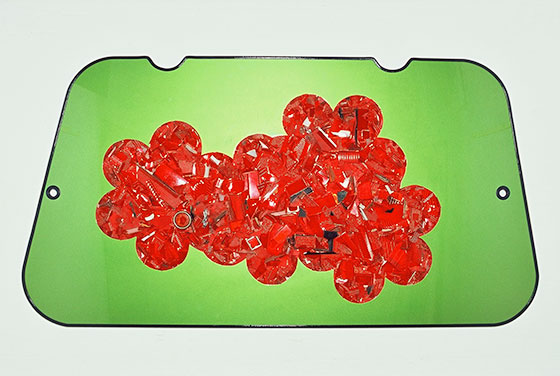 Before the reflector lens, Calvert was making icy green sculptures of rabbits, gerbils and squirrels from fragments of smashed toughened-glass doors.

“The automatic reading was that it was windscreen glass. Everybody who saw it assumed it came from a truck or car windscreen,” he says. Calvert makes flowered panels from road accident debris. “For as long as I can remember, I have been trying to make work to come to terms with the lack of a father. Most of my work has been about the accident or the car or him in one way or another.

“Now I have a son. He is only three, I think about that relationship between my father and me and me and my son. I have no real memory of my dad, but apparently I am very much like him, and I start thinking about things like, I am having a huge impact on my son, and hell, have no memory of this stage.”

But I wonder if there isn’t a like-father-like-son aspect to Calvert’s gritty and glossy wall pieces as well. The idea of him poring over his full-colour, high-performance car catalogues pondering what might work best on the wall doesn’t seem so removed from his father collecting colourful cars – a purple Monaro, a cream Mini, an orange Falcon and the deadly green Capella.